The Jiangmen Underground Neutrino Observatory (JUNO), is an experiment that will be lead with the collaboration of INFN, the Italian institute for Nuclear physics.

After supplying the first 7 centrifugal pumps in 2018, CDR Pompe is proud to have been granted the possibility of continuing the cooperation with the National Institute of Nuclear Physics (INFN) and the Institute of High Energy Physics (Ihep) in China. Another 17 CDR centrifugal pumps will be supplied and used to drive a giant underground liquid scintillator neutrino detector, which construction began in 2015 and will be put in operation in 2021.

The project, which is international and involves the cooperation of universities and research bodies from as many as 16 different countries, will use the same technology of the Borexino experiment at the INFN Gran Sasso Laboratories.

What is the JUNO project and what is its purpose?

Let’s deepen the nature of this important experiment. JUNO is an experiment with several scientific purposes for physics research.

The main goal is to determine the hierarchy of the neutrinos’ masses, throughout anti-neutrinos generated by nuclear fission from two nuclear reactor placed 53 km far away from the lab, on the southern coast of China.

The experiment has the aim to research and discover the features of this elementary particle which, due to its low probability to interact with matter, remains fleeing and difficult to detect. The only way to detect neutrinos is through enormous underground devices, in order to escape cosmic radiation that passes through the atmosphere.

CDR’s centrifugal pumps will be employed on a giant underground neutrinos’ detector for stripping, the technology used will be the same one used for Borexino, at national laboratory of Gran Sasso.

To intercept neutrinos, twenty thousand tons of stripping fluid will be canalized into a 40 metres diameter sphere. All around, twenty thousand photo-multipliers will measure the interaction between the fluid and the neutrinos. The pump model chosen is the UTN-BL 40-25-160 in PFA.

Why choosing a magnetic drive centrifugal pump? And why PFA?

The lined part is made of PFA, and it has been chosen for its high chemical compatibility, while the magnetic drive guarantee a perfect isolation of the pump casing from the shaft and the external environment. The impeller, indeed, is dragged by the interaction between the magnets, not by the shaft.

The isolation shell is placed between those ones, in order to guarantee the isolation of the fluid and avoid any possible leak. This kind of isolation is crucial for the experiment to be successful.

The magnetic drive pumps have been tested by the national institute for Nuclear physics throughout a helium leak detector to evaluate them to be completely flood-proof. All the tests have been positive, no leak of fluid have been registered. The registered value was 2,5?10−8 mbar L / s. Pumps have been assembled through manned assembly, in partnership with our client, to guarantee an high level of hygiene and neatness.

JUNO will be, together with HYPER-KAMIOKANDE in Japan and LBNF at FERMILAB, one of the three great experiments that will employ giant neutrino detectors, artificially produced in reactors or with particle accelerators, under construction in the coming years.

CDR Pompe is really proud to be able to contribute and to be part of this important international experiment. 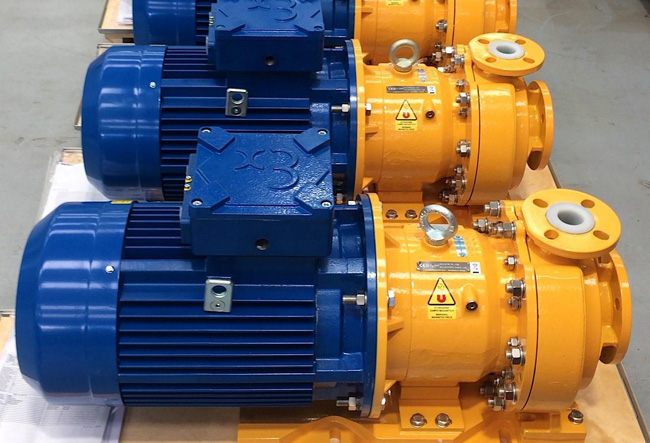